You are here: Home / Background Checks / An Analysis of Workplace Theft Reveals What Method Is Most Successful at Finding Fraud 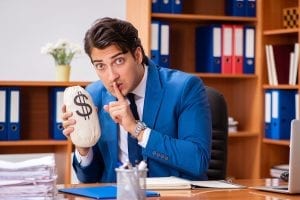 An analysis of workplace theft during 2018 was issued by the Association of Certified Fraud Examiners. It revealed some startling statistics concerning workplace theft. Their report is here .

This blog post summarizes some of the study’s key findings in the area of workplace theft. These summaries will hopefully illuminate the ways fraud is committed and how it is found.

2690 cases of occupational fraud were analyzed occurring in 125 countries and 23 different industry categories. These cases resulted in a combined $7 billion in total losses.

The study does mention that “only” 4% of the perpetrators had a prior fraud conviction. There is no indication in the study of the magnitude of the fraud committed by people with prior fraud convictions. And, given that the study examined results from 125 countries, there is no way to tell if these other countries had the level of sophistication that USA has in recording prior fraud convictions. After all, 4% is still 4%. I write that admittedly in a defense of conducting background investigations to determine if an individual has unacceptable past criminal behavior in their background. We believe conducting such investigations have a goal toward screening out people who may commit a similar crime while in your employ. The study admits that it is safe to assume that the 2,690 cases included in the study represent only a tiny fraction of the frauds committed against organizations worldwide during that time.

What does the study find about how occupational fraud is initially detected? Tips are the most common detection method coming in at 40%. Internal Audit finds 15% of fraud. Management review finds 13% of fraud. Other methods find the remaining 32% including Account Reconciliations, Document Examinations, External Audit, Surveillance, Notification by Law Enforcement.  It would seem the most effective method for finding fraud is to have a Tip Line for employees to report observed fraud. The study finds that 63% of victim organizations had a Tip Hotline.

The Study contains valuable information concerning how your organization can reduce the risk of losses due to fraud. We encourage you to read the article.