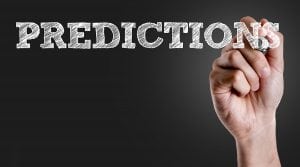 What does a study of the predictability of future criminal activity among firearm owners have to do with employment screening? The answer goes to the reason we believe employers should conduct background investigations. We think people will typically behave in the future as they have behaved in the past. We think this UC Davis study   proves this point. It identifies a propensity of individuals who committed alcohol related crimes to commit firearms violations in the future. Bad behavior in the past will most likely mean bad behavior in the future.

People will typically behave in your employ as they have behaved in the past. If an individual is falsifying your employment application, we think there is a strong likelihood they will continue to falsify documents while in your employ.

If someone has engaged in unacceptable behavior that has resulted in criminal convictions in the past, again, we think there is a strong likelihood they will continue to behave in the unacceptable manner. It is important to consider the EEOC’s Green Factors  when evaluating criminal convictions in a person’s background. These factors are relevant to assessing whether a criminal record exclusion is job related for the position in question and consistent with business necessity. The three factors to consider are:

The nature and gravity of the offense.

The time that has passed since the offense and/or completion of the sentence.

The nature of the job held or sought.

And, screening on a pre-employment basis for someone using illegal drugs makes sense since people will typically continue to use them while in your employ.

Some pertinent excerpts from the article   are as follows:

“We found prior DUI and other alcohol-related convictions among legal handgun owners in California increased the risk of arrest for a violent or firearm-related crime fourfold to fivefold,” said Garen Wintemute, professor of emergency medicine and director of the UC Davis Violence Prevention Research Program. “The increase in risk was large and independent of other well-known risk factors for future violence. This suggests that prior convictions for alcohol-related crime may be an important predictor of risk for future criminal activity among firearm owners.”

“Understanding risk factors for violence is obviously of interest in a population that by definition has universal access to firearms,” Wintemute explained. “In essence, we’ve learned that a history of alcohol-related crimes such as DUI has the same type of predictive significance among firearm owners that it does in the general population.”