You are here: Home / Drug Testing / What Reduces Substance Abuse in Your Employee Population by almost 50% 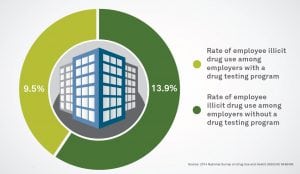 Substance abuse in your employee population can be very costly to other associates, clients, the public and to your profit margins. And it decreases employee morale.

According to an EHS Today article,  the National Council on Alcoholism and Drug Dependence (NCADD) reported that substance abuse in 2014 cost companies $81 billion in lost productivity, turnover, negative workplace behavior, injury and liability and accidental deaths.

The NCADD also reports that 70% of individuals who use illegal drugs are employed. Individuals who have had at least three jobs in the past five years are twice as likely to be substance abusers than those with fewer job changes.
What are some indications that an employee is abusing alcohol or illegal drugs?

The EHS Today article mentions that according to NCADD, the following job performance and workplace behaviors may be signs that indicate possible workplace drug problems:

We recommend to our clients that an employee suspected of being under the influence should always be confronted by TWO managers only after suspicious behavior has been documented.

A well-written and well enforced drug free workplace policy and program will probably reduce substance abuse and illicit drug use by 50% according to this Quest Diagnostics article.

Let’s assume one substance abuser costs you $7,000  That means simply that you are losing approximately $35,000 per year just for not having a drug free workplace program.