You are here: Home / Background Checks / Fingerprint Records in the Employment Screening Process 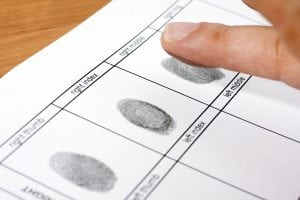 Fingerprint Records are being required of employers more and more frequently. This is true particularly if an employer is required to comply with requirements of one of their clients e.g. a school or government entity. This article summarizes the difficulties in using the FBI fingerprint record database especially when using them in the employment screening process and lists some of the advantages in using a name-based verification search for criminal records.

Recently the National Association of Professional Background Screeners (NAPBS) issued a white paper listing some of the difficulties and obstacles in using an FBI finger print record check.

The FBI fingerprint database relies exclusively on state and municipal entities sending copies of fingerprint records to them. Often, fingerprint records are not obtained particularly if the charge is relatively minor. In fact, many minor misdemeanor charges and driving incidents do not result in local police obtaining fingerprint records. If such an individual is eventually found guilty, the only record will be in the county courthouse. This supports the accuracy of performing a name-address-date of birth criminal records search at the local and federal district  jurisdictional level.

Many people have been arrested and fingerprinted and photographed. Think about it, anyone can get arrested for almost anything. Perhaps charges were never filed, the case in almost half the records in the system. If charges were never filed, an unsuspecting person may think their problems over. In many instance, the nightmare just begins particularly if that same person is the subject of an FBI fingerprint checks.

Many think FBI criminal history records are the gold standard in finding criminal convictions in a person’s background. On the contrary, these records are filled with incomplete information. What do I mean by incomplete information? These records routinely do not contain dispositions. The police are great at getting fingerprint records upon the arrest. However, what isn’t included in the record is the ultimate disposition. Why is that important? Because an arrest is not necessarily an indication that criminal behavior occurred. And, the EEOC states that using arrests to make hiring decisions is unacceptable in most situations.

The GAO report corroborated a similar report issued by the National Employment and Law Project (NELP) in July 2013. That NELP report stated that almost one half of records in the FBI database are inaccurate. The records were inaccurate in the sense that there is no indication of the disposition of the action taken against the individual. The GAO report tries, in our opinion, to portray an improving situation on the part of states to provide dispositions. However, the results are still pretty scary. Only 20 states have anywhere near reporting greater than 75%. 7 states had no data available on reporting dispositions and 10 states had less than 50% rate of reporting dispositions.

Many people think that there is one super-duper database on the web that can be consulted to determine if someone has a criminal conviction in their background. This is just not the case and is particularly true of record in the FBI fingerprint database for reasons listed elsewhere in this blog post.

To enforce a fingerprint record or allow a name/date of birth/address criminal record search was a question faced by the Public Service Commission of Maryland in late 2016.  Rasier and Lyft filed both filed with the Public Service Commission of Maryland a Petition to waive applicable fingerprint-based background check requirements in lieu of their current investigation process. Their decision – the Commission approves an alternative process for Rasier and Lyft.

When a consumer reporting agency performs a criminal conviction investigation, up-to-date and accurate records at the local jurisdictional level are consulted. Best practices include a Trace Report to identify former and alias names associated with a social security number and a more accurate address history. Also, multi-jurisdictional databases can be used to cast a wider net across the country with hits from this database being confirmed at the local and federal district jurisdictional level.

The Department of Justice has stated that “users may not want to rely exclusively on an FBI and state repository checks and may also want to check other record sources, such as commercial databases and local courthouses, to obtain more complete and up-to-date information.” (The Attorney General’s Report on Criminal History Background)